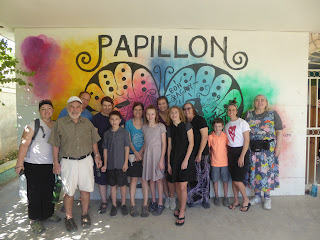 Today the team started the day at Papillon, an organization that focuses on job creation for parents so that they will not be forced to give their children up for economic reasons. There, artisans are creating all types of goods, from pottery to textile goods. Each of them a master in their craft. After the tour, we did some shopping and enjoyed frozen beverages on their patio. 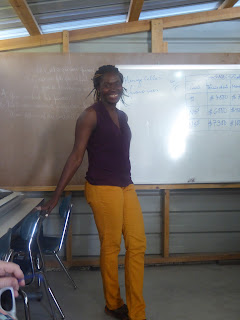 Our next stop was Teach Haiti, a school started by a Haitian woman who came to Minnesota for college, and returned home to teach students who otherwise couldn't afford it. The students all have massive vision and dreams, the most common career aspirations were doctor, engineer, chemist, soccer player, and lawyer. These students were incredibly smart and so welcoming to us. They all are learning English, French and some Spanish along with Kreyol.

After a short rest at the guesthouse our team visited the Home for Sick and Dying Babies. Though the name is discouraging, the children being treated there made everyone smile. These kids are primarily malnourished, and some are being treated for serious health concerns. The team fed babies, and held those who wanted to be held, and many were able to go out and play on the playground with out team. This visit came with many mixed emotions for our team. They so badly want to help, yet the need in Haiti is overwhelming. What they are beginning to see is how we need Haiti, not to "fix it", but rather to fix us. We are the ones being changed this week. Not one of these team members will leave unchanged.

I am so grateful for this family, and that Taylor and I get the privilege of serving alongside them this week. God is doing some really cool stuff in and through each of them. 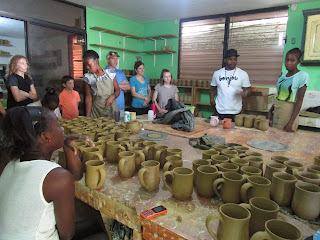 Posted by Healing Haiti Mission Team at 6:04 PM No comments:

We started our day at Fleri (flurry) Farms.  It was started by Healing Haiti and is now an independent for profit, organization. It is 28 acres. It is located in the most impoverished neighborhood in this hemisphere called Cite Soleil (City under the sun). There are many existing as well as future plans.

Currently there is a banana and plantain orchard, Mango, coconut, mango, papaya and passion fruit. They too may eventually be orchards as part of the farm. These were called the canopy crop. Under the canopy there are ground crops. Peppers, squash, eggplant, basil, and several others wrap up those items.  They are hoping to get four good ground crops to pursue. There is a large area of sugar cane that will be sold off to the highest bidder, and that land will be used for a new crop. They have an irrigation canal that is flooded when needed; to assist in watering.

They are starting a new program of planting a nursery to sell/give plants as well.
Along with this step is a demonstration garden of around a half acre will be set up.   The purpose is to teach local farmers how to maximize their plots. They are hoping to eventually start buying produce from the neighbors. When they can’t sell their crops at the market it is tossed. The farm is hoping to start dehydrating the fruit and shipping it. This will be teachable to the local farmers as well as selling the farms goods globally. They want to be able to ship produce fresh/dehydrated, so they are not competing with the neighbors.
They have been given a goal of the 28 acres impacting 1000 lives. Between hiring workers, teaching neighbors, and allowing a handful of poor neighbors to receive and sell in the market to earn enough to survive. 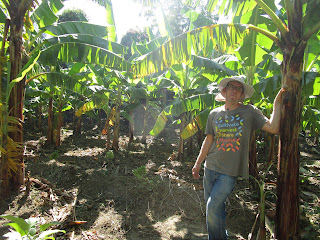 After the farm, we had three watering stops.  Healing Haiti has a huge tanker, everyone in Haiti must has water delivered via truck. Everyone either has a cistern that needs to be filled or the impoverished areas they have to bring their own containers which come in many sizes and shapes. There is lack of medical, educational and many other goods and services that are lacking.  Our main job was to help fill and carry the water with the people. Love the babies.  Every child wanted to be held including the larger older children.  When we put a child down another was there to replace them.  Plus, while you were holding someone, another person would want you to carry their water, so we did double duty. Also, when someone wrangled you, they held your hand and pushed other people away until all their containers were home. 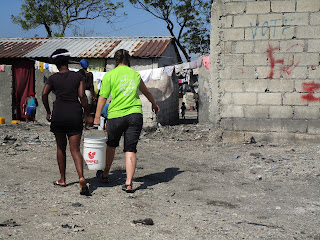 Healing Haiti built the community several buildings.  They asked the community what they wanted, and they said a church. That is where it started.  Because of the enormous mounds of garbage, they planned on needing to put the pylons down 20 feet.  Once they started it wend down 80 feet.  It was a considerable larger cost to them.  They all dropped the equipment and went to pray.  As always, God had it all worked out.
Today, the church is used for 0 students and teachers that come and are fed each day, in the church facility.  Apple and JAMF (their programmers) along with a container/pod company donated many laptops, iPads, etc. as a trial program.  They have three years to show its value.  It is the first one of its kind.  There are so many miracles attached to the story it is hard to post them all here but please ask me about them and the main teach “Ash”. 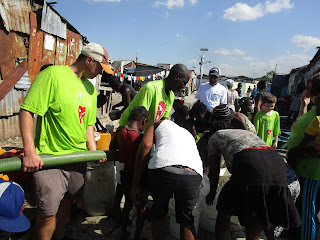 They also have built a medical clinic on the property and will be hiring all Haitian staff.  Three doctors, nurses, educators, etc. The equipment is currently in customs and they hope to have it up and running in January. The community chooses all of the students and has input on the other matters.

I am stopping here, but please do ask any of us about the many details left out.

Mona
Posted by Healing Haiti Mission Team at 4:30 AM No comments: