Another terrific day in Haiti. . . so many emotions, so much compassion, such humbled servants of Christ.

Difficult to find the words to describe our forever changing experience!!!!

The day began with another exceptional breakfast by our hosts and helping team members, including Jason on egg duty and Mike flipping pancakes. He even made a special Mickey Mouse pancake for Becki!

Our first stop of the day was to the amazing Grace Village in Titanyen which means "less than nothing." This is a village that Healing Haiti started a few years ago for orphans. Clearly God is at work here for today it is now a flourishing self sufficient community including a school for 500 kids, a full service clinic, dormitories, family style homes, feeding center, play grounds, library, and a church. Our group toured the grounds and the soon to be opened bakery which will provide many jobs for Haitians. 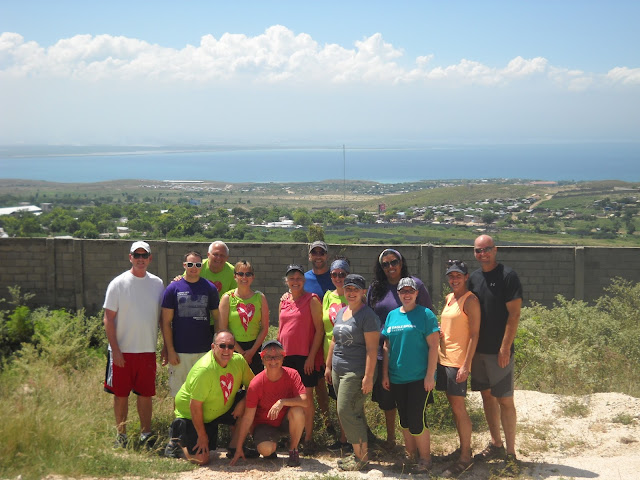 As the school children came out for lunch, the fun really began. Running towards us with open arms, their beautiful brown eyes & smiles were matched only by the excitement in their voices.
Despite lunch being served, they still wanted to first be held and played with in addition to displaying much curiosity with our sunglasses.

Our next stops were opportunities for us to be humble servants of Christ as we visited the homes of 3 of the community Elders.  At each of the visits we provided them with food and drink, as well as music and songs while we washed the hands and feet of these beautiful people.
What a spiritually changing experience!

We first visited a woman who was 91 years old who so wanted to dance it made it difficult to wash her feet! Her contagious spirit inspired us all.  The second stop we were warmly greeted with hugs.
In addition to the hand and feet washing, Paula was able to paint the sweet lady's fingernails! She chose purple which symbolizes spirituality, dignity, and wisdom.  Lastly we had the pleasure of visiting with a gentle man sitting by himself in his yard under a beautiful tree. He enjoyed the music and so did many of his neighbors as they came to listen and observe. The universal language of music and touch provides a powerful message of love. Everyone in our group could feel this today.

Processing the thoughts, questions, emotions, and spirituality following a day like this is challenging to say the least. We experienced hope, we experienced grace, and we experienced God's love, and one thing for certain.......we received much more than we were able to give.................

Posted by Healing Haiti Mission Team at 7:50 PM No comments: 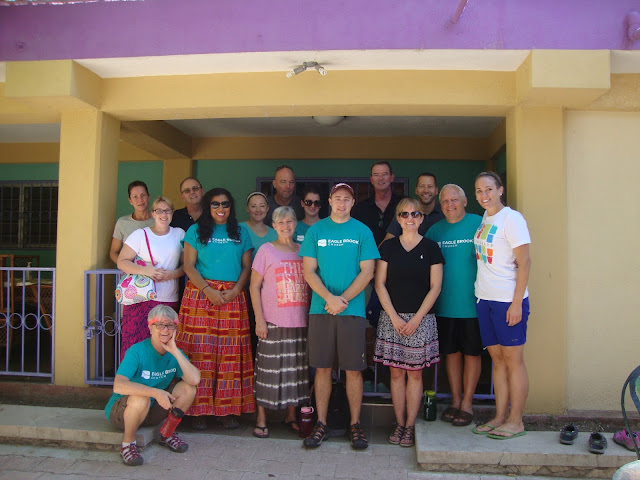 We went to the home of special needs children.  We played with between 20 - 25 residents in one small room.  The children were on a wide spectrum of needs from minimum to severe; toddlers to young adults.  The activities were singing, blowing bubbles, coloring & snack.  We observed each other's body language, and attempted communication through sign language and the spoken word.  Most of the time we just loved on each other with high fives, holding, rocking, hugging, shaking hands, and helping the children to be as content and happy with these activities.  One child was in need of extra attention, and could be disruptive at times.  Once the music started, this child became more relaxed and loving.  This is why I saw Jesus in the music we heard.  All of the children either started to dance, clap, and/or sing.  The music came from one of the residents who could sing in both English and French.  A few of the others were also bi-lingual.  At this time we all took the opportunity to touch each child and pray over them by the power of the Holy Spirit interceding for us.  This gave me hope for these children.  Jesus told us we are not alone, and He is faithful.  This seemed overwhelming for a moment and we all crumbled a little.  Jesus was there with us; surely He broke our hearts for what breaks His.
-Lois

Today was by far the best, and most difficult and emotional time on our mission trip so far. This morning we were split up into groups, part going to home of sick and dying babies, and the other part (fab five) to Dare's which is an orphanage for the disabled. A sad reality I learned today was that being disabled in Haiti you are often thought of as useless, and unwanted, and are given away to anyone who will take them. When we arrived and saw these kids "useless" and "unwanted" that was the furthest thing from my mind, all I wanted to do was get out the activities we brought for them and start to watch them smile and scream with joy and excitement. Although we had the activities for them, most of the children just wanted us to hold them or push/race them around in wheelchairs and they would steer as if they were driving or racing themselves. Each child had their own personality, even those who were immobile, all you had to do was look into their eyes and watch them as we started to sing or blow bubbles their eyes would light up with life. One of the best parts was snack time and being blessed to have the opportunity to be like Jesus and help feed those who could not feed themselves. Then after snack time we had our last few moments to kind of hang around with the kids and learn more about them. One of them that stuck out to us the most was a blind, 26 years old  man who has been living at the orphanage most of his life, and although his life has been difficult he took on the role as leader in starting up the songs that we sang praising God. He also sat down sat down with Jim, Jeff, and I and started to guess our ages, and to our amazement he got my age correct on the spot just by asking me to stand! Finally we prayed together and said our goodbyes. This moment here was the most difficult part of our trip/lives, saying goodbye to those who wanted and needed us so bad. Our hearts were full and overcome with emotion as tears filled our eyes rolled down our faces. Personally today this visit was a privilege to be able to be around these great kids and to be able to look at them through the eyes of God and know that even though they may be limited in some ways they are truly blessed to find joy in the most simplest of things.

This mission trip, so far, has been full of new experiences for everyone as we have grown so strong as a team through our evening sharing.  Today 10 of us were at the Home for Sick & Dying Babies.  When we arrived, about 5-6 mothers with there babies were waiting to get in.  When we actually got down to the reception area, there were another 8-12 families waiting for care for their children.  There were 2 areas, more severe & less severely ill children. Each room had rows if cribs, head to foot, with numbers on each crib.  We were there to just love them up, to do whatever we could do to for them.  Some we fed, changed diapers, helped them drink formula from a cup.  We were there to share the love of Jesus to these babies.

#14.    I walked into a section with the  more severely sick babies.  As soon as I walked in I saw a baby in #14.  I picked up this baby with a name I did not know & looked into the biggest brown eyes I have ever seen.  As I held this child, I am guessing a boy, to be about  7-9 months old, he just stared at me looking into my eyes.  I softly started to sing a lullaby that I wrote for my daughter when she was born.  He just kept looking at me as I sang. Then I prayed for this little one for God to heal this little guy. I held him for about 8-10 minute and went to put him back in his crib & he would have nothing to do with that.  He started to cry so I kept holding him a little longer.  I went to put him down & he started crying again.  My heart was torn so I kept holding him.  All he wanted was to be held, to have contact with someone.  At that moment in time I was that someone.  God put me in that child's life for that 15 minute or so, to show him that someone cared.  I put him down and walked away as he cried.  I walked around a corner so he could not see me. I am sure he touched my heart more than I touched his.

In the next section was a little girl laying in bed, very thin.  I started to rub her tummy & pray for her. A few moments later I started softly rubbing her hair.  She was hot to the touch, seeming to me to have a low grade fever.   I picked her up to hold her. I started praying for her and I could feel her back bone which seemed to be curved rather than straight.  I could  feel her rib cage, noticed sagging skin on her inner thigh.  This child was malnourished.  You see photos on TV or online but until you hold a child in this condition it does not really hit home. I held her and she did not move, just letting be hold her.  She was not the only baby like this that I held. This was a lot harder than I anticipated.

Last story.  I later went over to the side of babies not as severely ill.  In fact when I walked in there were many sitting on the floor playing with toys.  I sat down on the floor with a boy with a nerf soccer ball and we started to play catch.  As I played with him, he would giggle & smile.  I would imitate how he would throw the ball & he laugh & smile bigger.  I was leaning against a crib so I would hide the ball behind my head & he had a look of "what happened to the ball."  When the ball got away from him he would crawl after it.  All of a sudden, much to my surprise, he got up to walk after the ball. He then started to try to kick the ball.  I hope he had as much fun as I did.  After about 15 minutes I left this future soccer play and went on to bring the love of Jesus to as many babies as I could.

There are many babies I prayed over, sang to & fed.  This happened during visiting hours when parent had there babies in the court yard so the babies that were in the cribs did not have anyone, hopefully, only that day.  The team that went here this day at this time in the lives of these babies were called for such a time is this, to do his will & share the love of Jesus.

Posted by Healing Haiti Mission Team at 6:34 AM No comments: