We arrived in Haiti and were joyously greeted by Healing Haiti Haitian staff outside as we exited the Port-au-Prince airport.  The weather was a balmy 86 degrees - quite a difference from Minnesota and Kansas weather! The staff informed us that the Vikings had won the play off game against the Saints. The atmosphere in the streets is calm and peaceful and it's pretty much 'business-as-usual. This is a welcome change from the difficulties the people have been facing in the last months here. The schools are re-opening later this week.

After a short ride in our tap-tap on now paved roads we arrived at the Healing Haiti guesthouse and settled in and then enjoyed a great meal of oven baked shepherd's pie. After dinner time we walked up to the Elite Hotel meeting friends along the way to relax around the pool. Even though the pool water was super chilly some of the team members engaged in a rousing game of pool keep-the-ball in the air.

Back at the guesthouse we had a team meeting and Word of the Day. Some of the "Words" that came up are anticipation, excitement, and peaceful. There is singing, laughing and lot's of chatter going on all around the guesthouse. 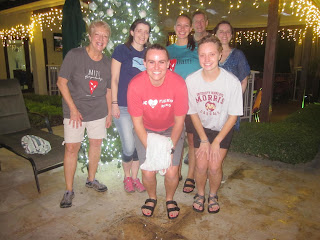 Posted by Healing Haiti Mission Team at 5:34 PM No comments: