First Days in Haiti - by Jake

It's Tuesday June 21st, the second day of our trip and man it is already a blast! We had to be at the airport by 3:30 am on Monday morning to meet up with everyone on the team. Everything went well for the most part on the planes except Tammy P. lost her luggage on the flight from Miami to Haiti but luckily found it the next day. We got settled in Monday so we could be ready to go on Tuesday. Everyone had to get up and be ready for breakfast by 8 and completely ready to leave by 9. The breakfast was absolutely delicious and everyone that we have met has been so great. My team has 14 people on it and the first thing we did was go to a special needs orphanage called Dare. There were so many kids and every single one of them had smiles on their faces that overwhelmed your heart with joy. We brought legos and balloons and a bunch of other things to play with them and every kid you touched or held or played with just brought a smile to your face. After Dare's we went back to the guest house and on the ride back Andrew and I sat up front with the driver and it was so crazy. The rules of the road are whoever has the bigger car gets the right of way so it was so chaotic, but so cool to see the culture and how it worked. After the break at the guest house we all went as one big group to Le Phare's which is another orphanage. At Le Phare's we brought a lot of different toys and things to play with like jump rope, frisbee, bubbles, coloring books, and pipe cleaners. Instantly you were surrounded by a bunch of little kids and you could just play. Andrew and I had kept putting kids on our shoulders which you would think would get tiring but at the time you never even thought about stopping. I had this one kid on my shoulders, his name is Jerz and he never showed any emotions until he was up on my shoulders, it just brought a huge smile to his face. Then the entire team brought out a big jump rope and everyone started to jump rope and it was so much fun because everyone was included and everyone was having fun and smiling. We had to go at about 2ish, and then we had to spilt up again and my team went to the Home for Sick and Dying Children. That really hit me hard because literally you are holding babies and feeding them and they are so small and they really are dying. There is another room for some older kids like ages 2-5 and you walk in and they all say "potem" which means pick me up and you just want to pick them all up but you only have 2 arms and that is so difficult but you just pick the kids up that you can and just love them. One of the only things you could say is "Jezi renmen ou" and that means Jesus loves you. Most of the little kids just said it right back which just fills you up with love and happiness even though you look at their situation and see them smiling it really makes you look at life at a different angle.  Sadly we had to leave and go back to the guest house but we did so much and had such a great day it has just been such an awesome time so far and I cannot wait for what else is to come! 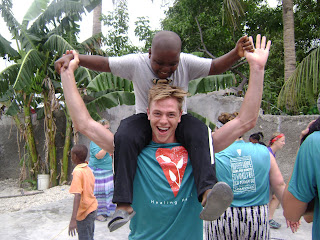 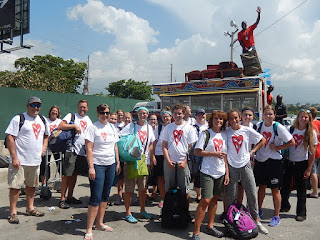